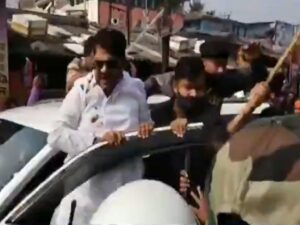 Kalyan Banerjee, senior Trinamool Congress (TMC) MP, wrote a letter to Union Home Secretary Ajay Bhalla on Saturday, saying that the chief of West Bengal over the attack on the convoy of BJP president JP Nadda Calling Delhi Secretary and Director General of Police is ‘politically motivated’. With this, he said that law and order is a state subject.

Banerjee, the Chief Whip of the Trinamool Congress (TMC) in the Lok Sabha, alleged that action was being taken to intimidate the state administration and summoned top officials at the behest of the Union Home Minister.

‘Interference in the federal structure’

He said, ‘We want to inform you that under the seventh list of the Constitution, law, and order comes under the jurisdiction of the states. In such a situation, how can you call the two officials for any kind of discussion in the context of law and order?

Banerjee (Kalyan Banerjee) wrote, ‘This seems to be a step taken for political purpose and at the behest of your minister who is a political figure of the Bharatiya Janata Party. You have issued that letter. You want to pressurize the officials of West Bengal under political vindictiveness. It seems that you are interfering in the federal structure.

He claimed to have been convicted in one case in a Nadda (JP Nadda) convoy and was an accused named in 59 other cases, who made gestures provoking Trinamool Congress workers standing by the roadside.

Banerjee said that in the matter of law and order, the state government is accountable to the assembly but not to you or your home minister.

He said, at the behest of BJP leader and Union Home Minister Amit Shah, you have thrown the law into the river with this work. The Trinamool MP said that indirectly an attempt is being made to impose an Emergency in West Bengal.

He said that the Parliament session is not going on, so he has resorted to a letter from the party to strongly oppose the Centre’s move. It is noteworthy that the Union Home Ministry on Friday asked West Bengal Chief Secretary Alapan Bandopadhyay and Director General of Police Virendra to appear on December 14 to clarify the law and order situation in the state.

After this, Governor Jagdeep Dhankhar also sent his report to the Center in the backdrop of the attack on the convoy of Nadda (JP Nadda) in the South 24 Parganas district on 10 December.

What actually happened on Thursday?

On Thursday heading towards 24 paragana district in the area of the diamond harbor, some people tried to stop the convoy of J P Nadda. The cars present during the convoy was attacked with stone and bricks. The incident took place at the parliamentary constituency of the chief minister’s nephew Abhishek Banerjee.

In the attack, 8 BJP workers are injured and they are hospitalized. At the same time, party leaders Kailash Vijayvargiya and Mukul Roy have also suffered minor injuries. The BJP has blamed goons and supporters of the Trinamool Congress.

In the video clip, it can be seen that as the cars moved on around 60 Km far from Kolkata in the area of Diamond Harbour the crowed road is smashing stone. It is shown rock smashing through windscreens and windows.

West Bengal Governor Jagdeep Dhankar, Representative of the BJP led government at the center, after this incident he has also aroused his permanent war with the Trinamool government.