TIKTOK NEW PETITION IN US COURT 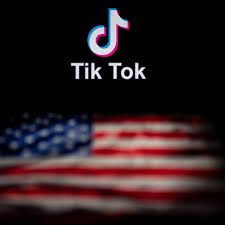 Tiktok is a chinese app made for entertainment purposes but soon people started using it widely. It gives the user many fun and entertaining video content, user can create their own videos too on this app and once you become a popular user on it you can even earn money from this app so in very less time people of every age group got attracted towards it and without knowing they started spending their much time on it and with that teenagers also got engaged in this and were not focusing on their study so it started taking the young generation into bad bath spoiling their future. Later with time youngsters started getting spoiled because of this everyday new trend started on tiktok and the most of the population got influenced by it and kept themselves busy in it only, because of this video message trend many negative messages also started spreading which needed to be stopped. Till the time use and misuse of tik tok was in the same person’s hand it didn’t bother the country much. when it was personal the government did not take any action, but when this started interfering in the security of the country the government took action and banned it in India. The relationship of our country with China started worsening and China started to misuse people’s information so Indian government decided to ban tik tok along with different chinese apps to make sure they don’t use personal details of people. Finding security risk to the country’s confidential information, the US also decided to ban chinese apps in their country. When Donald Trump was president of the US, he ordered a ban of the tik tok app. Now tik tok asked the Washington court to stop this order from the ex-president of the US. This app was produced by ByteDance and was given a deadline till Thursday to restructure ownership of the app in the United States to satisfy US security concerns. The company in a statement said that they wanted a 30 days extension from the government because they continuously proposed new requests to the government but didn’t get clear instructions on whether that is acceptable or not. It was being sent to the court for further assistance, US then President Donald Trump signed this order against this video platform this summer. This petition was filed in the US court to know the status of the ban order from the ex-president of the country.  The company wants a review of actions taken by the Trump administration’s Committee on Foreign Investment in the United States (CFIUS) . The reason to review according to the country is that they haven’t heard from the Committee in weeks about the deadline. The CFIUS set the deadline of November 12th for TikTok to divest itself of “any tangible or intangible assets or property, wherever located, used to enable or support ByteDance’s operation of the TikTok application in the United States.” TikTok says it applied for a 30-day extension that was allowed for in the CFIUS’ order, but hasn’t received any communication on the matter. It’s not clear what would actually happen if the deadline passed; TikTok was granted a preliminary injunction against it late last month.For a year, TikTok has actively engaged with CFIUS in good faith to address its national security concerns, even as we disagree with its assessment,” TikTok says in a statement to The Verge. “In the nearly two months since the President gave his preliminary approval to our proposal to satisfy those concerns, we have offered detailed solutions to finalize that agreement – but have received no substantive feedback on our extensive data privacy and security framework.” ByteDance agreed to sell part of its US business in a complicated deal including Oracle and Walmart, which President Trump approved in September. But the deal was never sanctioned by the Chinese government. All other countries along with India and the US are facing problems because of China as covid-19 was first seen there only, so every country is trying to safeguard it’s boundaries. They do not want China to come up with something that can have security risks. So every country is now paying more attention to it’s security, again facing threat to the country’s security Indian again recently banned 49 others apps along with popular snack videos.