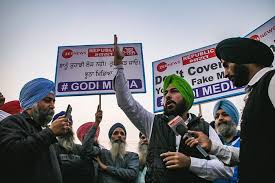 Everyone already know the use of social media and its power, this is one of the strongest thing or we can say it’s a weapon that each one of us has, we can use this weapon to protect our rights as well as with this weapon only we can keep our points before public to let them decide if we are going right or not. Social media is a strength with which you can fight for your rights along with anyone you want to support. With development in social media local and national media seems less powerful in front of newly emerged social media platforms. People now prefer social media more as compared to other digital and print media. Looking at the present scenario of farmers protesting in the capital city and the media not properly covering them, social media once again became a weapon to protect the rights of farmers. Farmers do not trust the leading media houses of the country and they also blamed that these media have worsened their problems and it has not portrayed them in a good manner. Farmers are angry with the media. They are asking media personnel to go back and not cover them because it will be of no help to them. It will still remain in favour of the government after seeing the miserable conditions of Farmers came from different regions.

Someone can surely ban media for their coverage but still they would need some medium through which they can contact to the government and concerned person in this place what can be a better option than social media platforms, it has proved it’s worth in  last few months, most of the cases were solved and justice was served because social media was involved in it. Now young Farmers also thought of using their personal weapon of social media to support protesting farmers, with the help of social media they are making sure real condition or images reach to government and public without misusing and tampering with it. It’s a good idea it is helpful for both government and farmers it will help in the upfront to serve justice to the Farmers and also through social media only government can also keep their points and try to convince the Farmers and take out some solution which is good for both farmers, government and most importantly for common people.

Young Farmers who saw media planning against them started posting their photos, videos and also, they showed live visuals of the protest, how farmers were protesting without harming anything and anyone. According to the leading media, they presented them as Khalistan supporters and tried to suppress their voices but this generation is not going to stop. They took advantage of social media and used it as their support system so that nobody can say that they are doing something wrong. One of the young farmers from them even said that after riding a tractor they learnt to run social media and twitter too. Farmers says that social media has helped them a lot to gain attention nationally and even internationally. Their friends in Kolkata, Pune had no idea about their struggle. They were unaware about what was happening, and it worried them. So, they started sharing posts on social media and requested their foreign friends to share them as well. Their fight was not restricted to the roads, it was an intellectual war. That’s why they had to strive against these policies on social media too.

At the same time, they are using social media to identify troublemakers amongst them, said one of them, from Ludhiana, who joined the protest on November 30. Their friends shared a video of a guy who was carrying stones with him. Sharing such stuff makes the people aware of any fringe elements.

Young Farmers are very much aware about their rights and they are fighting for it in a correct way, in this situation also they remember that it’s their country something could be wrong but not everything. So along with protesting they are making sure that no wrong image of them is portrayed and also people with wrong mindset could not hide in between which is sensible to think about.