Akhilesh Yadav decides to support farmers in their protest

Akhilesh Yadav decides to support farmers in their protest. 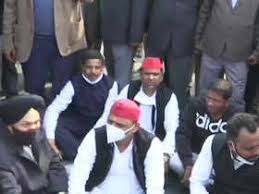 Ruskus over farm bill is going on for so many days, After attending so many meetings a final conclusion is yet to come. Again on 8th December “Bharat Bandh” has been announced in which many of the farmers’ organizations are included from many states like Punjab, Haryana, Uttar Pradesh, Uttrakhand, Rajasthan. Also, this bandh is supported by many political parties. Meanwhile, in the support of farmers former Uttar Pradesh Chief Minister and SP supremo Akhilesh Yadav has decided to join the Kisan Yatra. But before Akhilesh’s Kannauj Kisan yatra the area around the party office has been sealed.

Against agriculture law, the riot is still continued in Lucknow, before starting his journey Akhilesh Yadav has been taken into custody. Earlier,  the administration has barricaded him outside his house in Lucknow. After this incident, Akhilesh Yadav sat on a dharna near his house. Akhilesh claims that his vehicle has been seized. He is being sent to Eco Garden, for keeping him in custody over here.

In every movement of a politician, there is motive. It can be in any form might be for vote bank or for targeting BJP. Farmers who feed each and every citizen in India, In current time by living there family and there work they are silently protesting on road. By neglecting this chilled weather they are not moving back they are fighting for their rights and for the other farmer’s rights as well. What the government should do? The law passed by them cannot be taken back but yes the government should come in front and should explain to the farmers how this law can change their way of working.

Akhilesh Yadav asserted that if farmers are not happy with the Laws which are made for them, then the government should take it back. The voice of Farmers is not been listened to. Workers of the Samajwadi Party are being arrested in many districts of the state, and now he is also not allowed to depart for Kannauj. Akhilesh said that if he is not allowed to move forward through his vehicle he will walk as far as possible. He also added by saying that if the government is assuring to double the income of the farmers, but today a law has been introduced which can ruin the life of the farmers. Against the agriculture law, Samajwadi Party is in an aggressive mood and it is continuously opposing. Under the leadership of Akhilesh, this Kisan Yatra is to be taken out and it is also seen as the preparation for the Samajwadi Party’s 2022 assembly elections.

Significantly, on Monday SP is starting farmer tours across the state to support the farmers. The program is to travel 13 Km from Thathi Mandi to the farmers market of Tirwa.

The SP is starting farmer tours across the state on Monday to support the farmers who are protesting against the new agricultural laws and other problems related to the farmers. Under this, Akhilesh has a program to participate in the Yatra organized in Kannauj. His program is to travel 13 kilometers from Thathi Mandi to the farmers market of Tirwa.

If walking on the road by a politician can convince the government to change the law. Then where were these politicians when the whole country was asking justice for the Hatras victim? Although, this is an old topic yet it is something to be noticed.