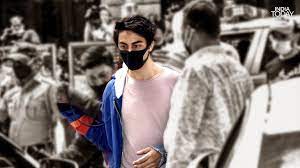 Aryan Khan remains in prison after a special court in Mumbai rejected his bail application on October 20. Aryan Khan, the
son of Bollywood superstar Shah Rukh Khan, was arrested in connection with a drugs case in early October.
There was meeting arrange for Shahrukh Khan and his soon. During the visitation, two jail guards were present as the two
spoke on the intercom with a grill and glass wall dividing them. Jail sources says that, Shah Rukh asked his son whether he was eating properly to which he said that he was not fond of the jail food. After speaking to his son , the actor requested the jail officials if his son could be given homemade meals to which he was informed that he needs to get permission from the court.
Aryan Khan remains in prison after a special court in Mumbai rejected his bail application on October 20. Aryan Khan, the
son of Bollywood superstar Shah Rukh Khan, was arrested in connection with a drugs case in early October. Aryan Khan, Arbaaz Merchant, and Munmun Dhamecha bail Got rejected the NDPS court on October 20, their lawyers have filed a bail application with the Bombay High Court. Shah Rukh and Gauri Khan’s son Aryan, along with 7 others was arrested. The Narcotics Control Bureau raided an alleged rave party on a cruise. Aryan Khan was arrested on October 3 in connection with a drugs raid conducted by the Narcotics Control Bureau. Helmed by zonal director Sameer Wankhede, the NCB’s Mumbai unit raided a cruise ship sailing from Maharashtra to Goa the city coast. As of October 20, Aryan Khan remains imprisoned at Mumbai’s Arthur Road Jail after a special drugs court rejected his bail application. Aryan’s lawyers have said they will be approaching the Bombay High Court to seek relief.
The raids produced a haul of 13 grams of cocaine, 21 grams of charas, 22 pills of MDMA and 5 grams of MD, the anti-drugs
bureau said About Aryan Khan Aryan Khan, born on November 13, 1997, is the eldest child of Bollywood actor Shah
Rukh Khan and interior designer Gauri Khan Aryan Khan holds a Bachelor’s degree in Fine Arts, Cinematic Arts and Television
Production from the School of Cinematic Arts at the University of Southern California in the United States. He did his schooling in the United Kingdom and Mumbai. Aryan Khan has two siblings, sister Suhana and brother AbRam.
On October 2 Aryan Khan left his home in Mumbai’s Bandra to attend a party on board Cordelia Cruises’ Empress ship. A
two-day ‘musical voyage’ from Maharashtra to Goa On board the ship, NCB officials began a search and the same night, it was reported that the NCB had seized various illegal drugs such as cocaine, charas, and MDMA from the ship and detained 7-8 people, including a Bollywood star’s son. According to the arrest memo, Aryan Khan was placed under arrest for “involvement in consumption, sale and purchase” of contraband Section 8,Section 20(b),Section 27, Section 35 are the cases filed on Aryan Khan. October 4: During one of the first hearings in the Aryan Khan case, the NCB sought an extension of the star kid’s police custody . On Oct 7th The court refused the demand and instead sent him to 14-day judicial custody. Aryan was shifted to Mumbai’s Arthur Road Jail the next day. On Oct 8th Aryan Khan moved the court for both interim and regular bail. On Oct 11 NDPS court heard the bail plea and directed the NCB to file its reply by October 13.
On Oct 13 The court postponed the hearing for the next day after hearing arguments from both sides. On Oct 14 was shut for
weekend. Oct 20 Aryan’s lawyers said that they would go to the Bombay High Court in appeal against the rejection of bail by the lower court. Aryan Khan’s lawyer advocated with following points. When Aryan Khan caught didn’t no drugs were recovered from him Alleged WhatsApp chats are not connected to present case Even if true, allegations pertain to ‘small
quantity’ and ‘consumption’ only Arguments from NCB officials side Drugs recovered from Aryan’s friend Arbaaz Merchant (allegedly six grams of Ni) were for both of them. WhatsApp chats suggest Aryan Khan was consuming drugs from many years .Aryan Khan is involved in conspiracy so the amount of drugs recovered is immaterial. Release of any accused will stop the investigation and we could not know whole thing about. Celebrities, Politician and common people are giving there views on this case.