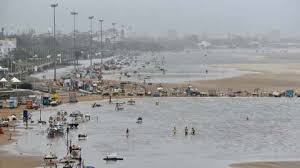 India very Severe Cyclonic Storm Nivar was a tropical cyclone which brought severe impacts to portions of Tamil Nadu and Andhra Pradesh in late November of 2020.

8,470 ha of paddy crops, 428 ha of pulses, 570 ha of oilseed crops and 998 ha of different yields have been immersed with rain water. The agri division has found ways to deplete the water rapidly.

Nivar is the second cyclone to have developed in the Bay of Bengal this year after Cyclone Amphan wreaked havoc in West Bengal in May. Amphan had intensified to become a ‘super cyclonic storm’.