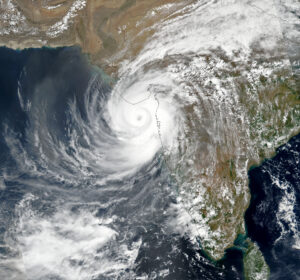 into a Deep Depression over North and adj Central BoB, likely to intnsify into a CS next 12 hrs and to cross South Odisha north AP coasts around kalingapatnam by eve of 26Sept . Cyclone Alert for north AP and Adj South Odisha coasts Yellow Message #imd #cyclone,”the IMD said on Twitter The Indian Meteorological Department has given an announcement for North coastal And hra Pradesh district and southern part of Odisha as the low the Bay of Bengal pressure area formed over . Likely to become more stronger into a cyclonic storm. In the latest update the ( IMD) Indian meteorological department said that there is a low pressure was formed over the bay of Bengal into a cyclonic storm in the next 12 hours. “ likely to move insentify into cycrelonic storm during the next 12 hours and West Southwest and cross South Odisha not Andhra Pradesh cost between Visakhapatnam and Gopalpur around kalingapatnam by the evening of September 26,”the IMD stated.
We may experience wind speed of 70 to 80 km per hour gusting up to 90 km per hour. The system is going to take shape of cyclonic storm for next two days on September 26th and 27th are crucial for us due to the prediction of heavy rain,” stated by Vijay Amruta kulange , Ganjam district collector The Ganjam collector said,” preparations are in in full swing to shift vulnerable section of population. We also so are preparing to evacuate people from hilly areas. People should avoid low lying area and hilly regions”. According to the prediction there can be heavy rainfall in few places and extremely heavy rainfall in few in two places is likely to occur over Odisha’s kandhamal , Gunjam, Rayagada Malkangiri ,Koraput, Nabarangapur and Gajapati district on September 26th.
Mr. Jena said he had discussions with (N national disaster response force audition disaster rapid action force and the director general of police deployment forces. DRF ( the the ) ODRAF ( Odisha ) ) for Heavy to very heavy rains at isolated places are likely Saturday and Sunday over coastal falls Andhra Pradesh and heavy at isolated places open not interior Odisha, Chhattisgarh and Telangana, the IMD said. “ Adequate awareness is being made about the the cyclonic storm. All concerned officers a nd Panchayat Raj institution representatives are being mobilized. Collectors have assured to take all actions said S R Pradeep. During the next three ”, days, , the sea condition will be rough and fishermen in Odisha West Bengal and Andhra Pradesh they have b een told not to venture into East Central an adjoining North East Bay of Bengal from September 25 th to September 27th .
Fisherman have been advised not to venture into the deep sea and return to the coast by Saturday. The weather of which has focus heavy rainfall at one or two places in kendrapara , Cuttack Khurda , Bh adrak Puri and Jag at Singh p ur districts on Sunday and heavy to very heavy rain in Puri the Ganjam gajapati kandhamal on Sunday. WIND WARNING Squally wind speed reaching guesting to 60 kmph 4050 kmph is likely long Odisha co ast from September 25 th and of morning will gradually increase becoming gale wind speed reaching 70 to 80 km ph gusting to 90 mph from the afternoon of September 26 midnight along and of South Odisha th coast. SEA CONDITION Sea conditions will be worst . It till to very rough over North West and West coast of Bengal along of Odisha coast on September 25 th and 26 th and along the Odisha coast on September 27 informed and med centre .
#indianmediacouncil
JENNIFER (Internship Trainee)