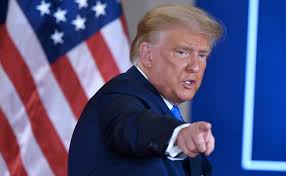 From the moment US has selected Joe Biden as its president , Donald Trump became furious and tried every possible way to change the election result but this could not happen as this is unconstitutional, after making headlines because of this Ex President of US is again in news because of his power to launch nuclear strike is a matter of concern now, let’s talk about it.Concerns on Friday over US President Donald Trump’s mental state have drawn focus on his power to unleash a nuclear attack.

Two days after Trump supporters, under his encouragement, stormed the US Capitol and shut down Congress, House Speaker Nancy Pelosi said she had contacted the Pentagon’s top general, Mark Milley, to understand how to prevent “an unhinged president” from using the secret nuclear launch codes to order a nuclear strike.As Milley presumably told her, the US constitution gives the president the sole power to launch a nuclear weapon.

Congress cannot interfere, and the leaders of the Pentagon, the generals and civilians, are bound to transmit his order, whether they agree with it or not.Everywhere he travels, the president is accompanied by an aide carrying the “nuclear football”, a bag containing instructions, attack plans and codes for initiating a nuclear strike that only the president can use.Given the need to consider the justification, what equipment to use and what targets are chosen, such a decision would normally be done in consultation with defense chiefs.

But once the president decides — whether after much deliberation or in a fit of anger — “neither the military nor Congress can overrule these orders,” said a December report on nuclear command and control from the Congressional Research Service.

The only restriction on the US leader in this case is the legality of the strike. The laws of war would allow a military official to refuse to execute an order to do something illegal.But questions about the legality of the order — whether it is consistent with the requirements, under the laws of armed conflict for necessity, proportionality, and distinction — are more likely to lead to consultations and changes in the president’s order than to a refusal by the military to execute the order,” according to the Congressional Research Service report.If the president does decide to order a strike, he would normally consult the military chiefs for his options.

In the “football”, he would find options for the attack and communications equipment to formally order it.He would make use of a card of codes unique to himself, called the “biscuit”, to certify his identification as the commander-in-chief empowered to order a launch.The launch order would then be transmitted to the US Strategic Command, where an officer would confirm it came from the president and execution would take place.It could be as little as two minutes from order to the launch of a ground-based nuclear-tipped missile, or 15 minutes from a submarine.”People in the chain of command might technically refuse to obey an order, but a verified order is presumed to be legal,” said Derek Johnson of the anti-nuclear organization Global Zero.”Pressure to obey would be massive.”In all of this, there are no exceptions in the system of nuclear command and control for a scenario in which the president is seen to be mentally unstable and ignores the advice of his generals.In that case, the only option — which Pelosi has called for in the case of Trump — is to invoke the constitution’s 25th amendment on removing a president from power.

Because of his unnecessary idea of creating violence Twitter suspended his account permanently.After Twitter suspended him on Friday, citing a risk of further incitement of violence following the storming of the US Capitol on Wednesday by hundreds of his supporters.Twitter permanently cut off Trump’s personal account and access to his nearly 90 million followers late on Friday, citing the risk of further incitement of violence, three days after Trump exhorted thousands of supporters to march on the Capitol as Congress met to certify his defeat to Democrat Joe Biden.

The resulting chaos, viewed with shock around the world, left a police officer and four others dead in its wake.  Trump’s frequent use of Twitter was a key part of his campaign as he overhauled the Republican Party and beat Democrat Hillary Clinton to win the presidency in 2016. Since then he has used it to fire up his political base, attacking those who opposed him.