HOW COVID-19 HAS IMPACTING THE JOURNALISM IN GLOB 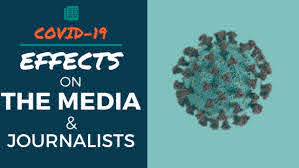 Covid-19 has changed the entire world and changes can be observed everywhere around us. Everyone is taking precautions to save themselves; people are trying another way trying to adapt according to the new environment, this has impacted everyone’s life and specially life of frontline workers who are actively doing their job outside their houses like doctors, nurses, police officers, journalists, service providers. Everyone is adjusting themselves according to the current situation. Let’s talk about the journalists who are working and making efforts to keep people informed about all the happenings in the world. They have been working selflessly from the day the news of the virus broke and created awareness among the people.

This has affected journalists everywhere around the world and many local newspaper and media houses had to bear this loss because they lost advertisement due to covid situation. So many media houses shut their business and many of them fired their employees due to lack of financial problems in the media houses.  No doubt this pandemic has limited us in many ways but it also has opened new opportunities and new options. This pandemic made everyone aware about the current situation and the demand of being updated started growing and in this lockdown phase duty of journalists increased because it was their responsibility to give proper information about everything to the common people.

If we compare the situation of Journalism from then to now it has changed a lot earlier the technology was not so developed but now you can find every information on the tap of your fingers. In this problematic condition our journalists gathered all their courage and worked for the world. When everyone was afraid, they were standing for the people to separate truth from a lie so that people can know themselves what is right and what is wrong. When everyone was in capture of fake news and was scared, they found hope from journalists who cleared out their fear. There were also journalists who acted as superheroes and saved people earlier but in this situation only the right information could save them from this virus and they played their role well.

It was difficult for them to manage their personal lives and professional lives altogether. It was like a mental breakdown for them. Some of them lost their lives, some had some issues in their family but still somehow, they managed to fulfill their duty.  And acted as a warrior.  They had to work for extra time and in less salary, fear of losing their job was all over and they were scared to get the virus but they stood tall on the screen and with courage and confidence they took out solutions and normalized the people. When there was nobody standing on the road in the market, when the government was not there to give proper assistance to poor people, the media was present there to fight for their rights and serve justice to them. The world faced many problems apart from pandemic like flood, starvation, accident, victory, loss, happiness, sorrow media was there to witness all these and they made sure that people can connect and relate with the situation to the fullest.

Journalists faced trauma,  depression,  loneliness when no was around,  when they got in touch with virus they felt the problem of the infected person when doctors and hospitals started treating poor people badly they were their to make sure everyone is getting treated and they transferred all the information to the people what country or world was during that time.  They gave proper assistance and help to the search truth behind the wrong information spreading. They tried to help people in getting justice who were ill-treated by administrators, police officers or local people.  With so much chaos around they kept calm and handled the situation with patience and kept calm. They managed the situation at their level and stood with the people from the initial days, they transferred the information of the government to the people and showed the actual condition of suffering people. They did their job which was to be the link between the government and the people. They didn’t let the world feel their pain and showed the pain of the world so that each one of us can understand and help others in need.