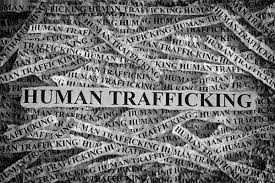 HUMAN TRAFFICKING : Human Trafficking is the recruitment, transportation, transfer, harboring or receipt of people through force, fraud or deception, with the aim of exploiting them for profit. Men, women and children of all ages and from all backgrounds can become victims of this crime, which occurs in every region of the world. The traffickers often use violence or fraudulent employment agencies and fake promises of education and job opportunities to trick and coerce their victims. (According to UNO)
Human trafficking started in :-
In 1899 and then in 1902, international conferences against white slavery were organized in Paris. In 1904, the International Agreement for the Suppression of “White Slave Traffic,” the first international agreement on human trafficking, was
signed. The main purpose was to ensure the repatriation of the victims.
India’s Rule against Human Trafficking “Whoever commits the offence of aggravated form of trafficking of a person shall be punishable with rigorous imprisonment for a term for ten years but which may extend to imprisonment for life and shall
also be liable to fine which may extend to ten lakh rupees,” according to the provisions of the bill. The Criminal Law (Amendment) Act 2013, known as the  Nirbhaya Act has come into force wherein Section 370 of the Indian Penal Code has been substituted with 370A (IPC) which provides for comprehensive measures to counter the menace of human trafficking including trafficking of children for exploitation in any form Affected areas in India
The most affected areas are Bihar, Maharashtra Telangana, Jharkhand, Rajasthan, Andhra Pradesh, Assam, Orissa and West Bengal and all were 18 years below. It’s estimated that internationally there are between 20 million and 40 million people in
modern slavery today. .. Human trafficking earns global profits of roughly $150 billion a year for traffickers, $99 billion of which comes from commercial sexual exploitation Causes and effects
Human trafficking happens due to Racism Gender Discrimination, Illiteracy, Poverty, Natural disasters improper support from the family, Violence, Child Marriage, Unemployment conflicts some major . Due to this victims may experience psychological
issues physical torture, traumatic injuries they may Memory loss , Anxiety, Fear , shame.
Types of Human Trafficking
Forced labour :
“All work or service which is exacted from any person under the threat of a penalty and for which the person has not offered himself or herself voluntarily.” Construction, mining, quarrying and brick kilns. Manufacturing, processing and packaging. Prostitution and sexual exploitation. Market trading and illegal activities. Poverty is one
of the main for forces labour.

Sex Trafficking:
Sex and human traffickers get their victims through the use of physical force, threats, psychological manipulation, and other tactics. ..In other cases, traffickers looking for a new victim may physically capture or restrain their target until they can gain
control of them.
Organ Trafficking:
Organ trafficking is a broad concept that includes several illegal activities, of which the main goal is to profit from human organs and tissue, for the sole purpose of transplantation. These activities include THBOR, transplant tourism and trafficking in organs and tissues Child soldiers Recruiting and using children under the age of 15 as sold is prohibited under international humanitarian law – treaty and custom – and is defined as a war crime by the International Criminal Court

Forced Marriage:
Forced marriage is when one or both participants are married without consent. Forced marriage happens as a result of emotional and financial threats, pressure, or coercion. Therefore, usually one or both participants do not have the chance or
power to consent.
PREVENTION:-
1.Participate in #WearBlueDay for Human Trafficking Awareness Day on Jan 11
2.Report a trafficking tip to the FBI
3.Be alert during AMBER alerts
4.Support non profit organization
5.Download the Traffick Cam app to send hotel images that can aid investigations
6.Try to protect you and your family, Surrounding people
7.find missing people by taking time to learn OSINT
8.Learn how to spot the signs of sexual exploitation

Conclusions: Human trafficking is very harmful to human kind It is almost happening all over the world
governments, NGO’s, and Foundations are beginning to recognize the necessity  and also try to stop human trafficking
protection, prosecution, and prevention.. However, increased awareness and resources are Crucial to successfully eradicate human trafficking. And it is even our own duty to try eradicate Human Trafficking.