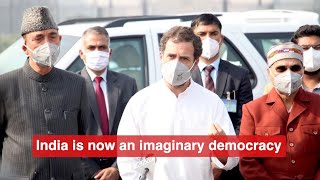 Democracy means For the people, By the people and Of the people. But is it really happening these days?

I will keep it short.  If any reform, bill, or any particular change in system is for the benefit of the masses so it clearly means that the people will be involved in the formulation of the same. But our government I think does not have the same ideology.

Because be it demonetization, lockdown or these farm bills they all were passed or implemented in haste. No debate, no discussion over them in parliament, no prior information; just like dictatorship they were enforced. So they were definitely not By the people and we have seen people opposing it so they are not For the people.

Moving further and talking about democracy.  What about our right to freedom of movement.

Article 19(1)(d) gives us a fundamental right to “move freely throughout the territory of India”, from one state to another, with a sense of security and freedom.

Really is it so? Because when the farmers tried to move from one state to another for peaceful protest there were hindrances in their way in the form of water cannons, tear gas bombs. Infect the intention to stop the farmers was so high that NH 1 was intentionally dug down, which in itself is a punishable offence and just to remind all of you the highway was constructed by using the hard earned money of the tax payers.

So if the Govt does this it is perfectly fine, no one even spoke about it, no guilt, no regrets. Just imagine had it been done by the people protesting- how much hue and cry must have been there!

Now let me take you to the era of Pre Independence. Even the Britishers did not stop Gandhi ji from doing peaceful protest.  If the scene would have been the way it is today dandi march would have never taken place and we would still be buying salt at an expensive price or maybe we would still be deprived of it.

Let’s come to the next pillar-Secularism.

India is a land of diverse culture. Unity in diversity, we all are one, all religions are one, freedom of speech, right to freedom of religion, right to constitutional remedies all are imbibed in our constitution of India. Then why are we devoid of these fundamental rights?

Freedom of speech—the right to express opinions without government restraint—is a democratic ideal.

The Constitution of India provides the right of freedom, given in article 19 with the view of guaranteeing individual rights that were considered vital by the framers of the constitution. The right to freedom in Article 19 guarantees the freedom of speech and expression, as one of its six freedoms.

We all have been given the right to speak but wait I think it implies to only those people who are speaking in favour of the Govt. because any other person trying to keep their point are pointed as anti nationalist, tukde tukde gang and God knows what all anti national elements are connected with them.

Few days back  there was news regarding woman being detained due to love jihad laws and suffered miscarriage.  https://www.hindustantimes.com/india-news/woman-detained-under-up-s-new-law-against-love-jihad-suffers-miscarriage/story-ZJyLolrouFhyK8lFJfrGjK.html

Yes, you read it right it is happening in India where in few states we don’t have the right to choose our own life partner. This news made me believe that India is definitely not developing infact is falling into the same ditch. We all are going backwards and failing the efforts of all the revolutionaries who gave their life to free India from all these evil practices.  And wow I did not hear the Govt. and their so called supporters speaking against this news and this law. Again a law that is implemented just like this only.

Let me now come to the final part Economic front – It has always been seen that our farmers otherwise also have been committing suicide because of debt, low produce prices, stress and family responsibilities,  poor irrigation, increased cost of cultivation, private money lenders, use of chemical fertilizers and crop failure.  And now the GOI comes with new bills and is saying that these bills are going to benefit the farmers in the times to come, which I guess only they know how! The poor, old farmers have been sitting in the cold biting winters on the roads so that their future is safe and secure. And there are people who are saying that the protest is fake, uncalled for as farmers already get lot of benefits in the form of subsidies.

So just to bring to the notice of everyone I am going to highlight few points which might explain everyone that who the actual beneficiaries of these subsidies are:

When it comes to subsidy it is not only the farmers availing it but it is also availed by Amber, Dixon and Blue star various makers of Apple I phone, successful pharma companies and auto ancillary companies. Subsidies to IITs, universities like JNU, BHU and subsidy to rich borrowers who took loan up to 2CR Rupees during lockdown should also be seen with the same eye.

What I want to say today is that no nation is free from problems but let us become a nation where a viable solution is given to the people by the Govt., so that the growth of nation is not hampered. Rather than playing politics against the innocent people, the Govt. should mobilize their intellect and eminent economists to take correct and rationale decisions. I hope and pray that the plea of the farmers- our Anndata  is heard soon.

NO FARMER NO FOOD

I would like to end on an emotional note where a farmer and a labourer is talking that what will happen if these bills are passed.