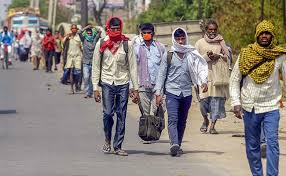 Each section of the society has gone through many downs during the lockdown in the world and the consequences of the lockdown got even worst. One section of the society which suffered the most and had gone through the maximum crisis constitutes of migrant workers. They have to go through unparalleled suffering due to lockdown and it still continues to unfold in its multiple dimensions.

As designated by U.N., 18th December is celebrated as “International Migrants day” to cherish the contribution of  272 million migrant workers across the globe, 41 million are internally displaced.

Among 272 million migrant workers, 139 million workers solely belongs to India , in which 1/ 3belongs to Delhi and Mumbai together.

As a nation, we witnessed the unfolding of the harrowing tragedy of migrant workers, where millions of them, particularly in our metro cities, were rendered jobless, with no wages, no food and no shelter.

They had no sort of social security or access to health were unimaginable and unacceptable. As a result, lakhs of migrant workers had to take the painful journey of going back to their homes villages on foot while facing extreme heat, hunger, exhaustion and a repressive police who thought that they are not following the rules and regulations formed by the government of the country to combat the corona virus and not people in deep distress. Many died on the roads and most had to go through unbearable pain.

The issue of migrate workers has always been the most ignored or outmost in the policies of government or even the architecture welfare society despite being the backbone in the urbanisation projects.

In this article we are exclusively going to discuss that how these migrant workers have no floor for dignity and what are primary causes for migrant crisis in the country.

The very first cause is the sedentary bias against the migrant workers, it refers to the idea that migrants primarily belong to their place of birth or the source states. This bias often gets incorporated in public policies to the damage of migrant workers. For example, public services such as the PDS are not universally accessible. Ration cards made in the source state of the migrants cannot be used in the destination state which makes the PDS inaccessible to the migrant. In the present COVID-19 crisis, the sedentary bias of the policy framework became really important issue.

These sectors has no sort of governance, highly ungoverned, no room for state and law and all sorts of discrimination, they are highly unprotected. The workers face very poor adherence to their human and labour rights, lack of dignity and of livelihood, unsafe and unregulated working conditions and lower wages among many other vulnerabilities. These vulnerabilities of the informal sector and migrant workers became more prominent as the entire country went into a state of suspension due to the lockdown.

The situation of the migrant workers can be improved in the country if their socio- economic rights are secured, if they are provided with proper facilities in the other states as well except for their place of origin and secure work place would play a vital role. This would help to get minimum floor of dignity for migrant workers.

It would also need to address other critical concerns including gaps in systematic data as exposed in the parliament when the government said that it could not provide number of deaths or livelihood losses for migrant workers during the lockdown.