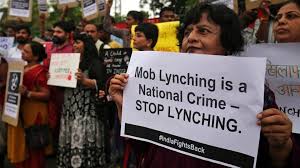 A Vigilante’s attack on Rule of Law ‘We the people’ – the opening words of the Constitution, the founding document of India – sums up the perception of society, of shared culture and history, and of civic affiliation, a perception that has been questioned throughout the lengthy period of Indian history. India, the fifth-largest economy in the world, is facing a threat to its integrity and growth, given the growing incidence of lynching. It is one of those hate crimes that through structured hate campaigns has become a language of indoctrinating vigilance. Mob lynching in India is a big religious and politico-legal crisis for democracy, requiring urgent solutions. Religion, when assisted by the political support, is an instrument used to infuse disdain in the minds of individuals, aiding the accused to commit such an offence fearlessly. There is a noticeable accretion in community forces that have succeeded in spreading violence by taking punitive extra-judicial measures, with rumours playing a significant role. The individuals are under consistent danger of getting executed or thrashed on insignificant grounds of doubt that they belong to a specific group, religion or caste. This attitude transforms society into a fascist state, as individuals, who elect their leaders, maintain silence at gunpoint, ultimately strengthening the moral legitimacy of the offenders. Meaning of the Phenomenon Lynching is not a new phenomenon, but it has been around the world all the time. The term lynch law refers to a self-constituted court that imposes sentence on a person without due process of law. Both terms are derived from the name of Charles Lynch (1736–96), a Virginia planter and justice of the peace who, during the American Revolution, headed an irregular court formed to punish loyalists. Indian Laws and Failure of their Implementation The criminal laws face a void as there is no law or provision that criminalizes mob lynching. Although IPC has provisions for murder, culpable homicide, rioting, and unlawful assembly but there is no provision for a group that comes collectively to kill a person. Under Section 223(a) of Criminal Procedure Code (CrPC), it is possible to punish two or more accused committing the same offence in the course of the “same transaction.” However, the provision falls short of punishing offenders of mob lynching. The National Campaign against mob lynching drafted a Lynching Act, 2017 for protection against violent lynching. Right to non-discrimination is imbibed in Article 14, which guarantees each person in the territory of India equality before the law and equal protection of laws. Article 15 of the Indian Constitution prevents discrimination of communities based on caste, sex, race, or religion. Incidents of lynching violate the right to equality and prohibition of discrimination enshrined in the Indian Constitution under Article 14 and Article 15, respectively. Article 21 of the Indian Constitution states, “No person shall be deprived of his life or personal liberty except under procedure established by law.” The objective of Article 21 is to prevent the state from depriving a person of his/her personal liberty and life. However, the Indian states have failed to implement the laws. The widespread corruption in law enforcement agencies, unconscionable delays in the disposal of cases by the judiciary and the unfair advantages to the rich and the dominance in the judicial system contribute to improper implementation of laws. In almost all of the cases, the police initially stalled investigations, ignored procedures, or even played a complicit role in the killings and cover-up of crimes. In a civilized society, even one lynching is too many. But India has seen a spate of them recently. The gravity of the situation has made the Supreme Court term it as a “horrendous act of mobocracy”.