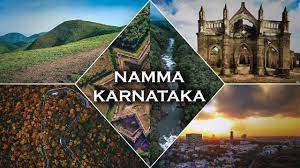 NAMMA KARNATAKA : Karnataka was ruled by many kings like Banavasi Kadamba, Gangas of Talakad,Chalukyas of Badami
Rastrakuta of Manyakheta  Chalukyas of Kalyana Sevunas of Devagiri, Hoysalaof Dwarasamudra,Vijayanagara,Bahamani
,Sultans of Bijapur ,Nayakas of Keladi , Wodeyars of Mysore, Sultanate of Srirangapattana, Mysore Wodeyars, British takeover and again Mysore .. Karnataka divided between Bombay State, Mysore
State, and Hyderabad State. .. India became Independent in 1947, and according to the States Reorganization Act, 1956, the Kannada-speaking areas of Hyderabad State, Madras State were unified with Mysore State. The state was renamed
Karnataka in 1973. Karnataka Rajyotsava or Kannada Rajyotsava or Kannada Day, also known as Karnataka Formation Day or Karnataka Day, is celebrated on 1 November of every year with Nada Geetha Jaya bharata Jananiya tanu Jathe, Jaya he Karnataka mathe!
Written by Rashtrakavi Kuvempu Karnataka flag Karnataka flag, a strip of yellow and red, symbolise Kannada and Karnataka, where yellow represents ‘Arisina’ (Haladi) and red represents ‘Kumkuma’. Kannadigas who have been worshipping Goddess Chamundeshwari, Yellamma and the state Goddess Bhuvaneshwari from thousands of years identify themselves with the ‘Arisina’ (yellow) and ‘Kumkuma’ (red) flag, which is a symbol of ‘Soubhagya’ signifying peace and courage respectively. It is hoisted every year by Chief Minister of Karnataka on Karnataka Rajyotsava (November 1st)

The dry deciduous forests are actually a type of the Indian deciduous or monsoon forests.The dry deciduous forests dominate
the lee side of the Western Ghats in the state.
Scrub and Thorny Forest The scrub and thorny forests are seen in the arid parts of the Deccan Plateau located in
the north-eastern part of the state. These forests receive less than 750 mm (30 in) annual rainfall. There is no rainfall during
the months of November to April And also experiences . High temperature during summer season Due to less rainfall the
vegetation of this forest type is characterize by thorny trees, spiny and xerophytic shrubs, and dry grassland.
Un-wooded Forest .There are several areas of grassland and wasteland found in Karnataka. In the heavy rainfall regions of the state the grasslands occur at high altitude Education system in Karnataka Karnataka is known for its well-structured
educational system There are three kinds of schools in Karnataka: government (run by the
government), aided (financial aid is provided by the government), and unaided private (no financial aid is provided). In
English medium schools they teach 1st language as English 2nd as kannada and 3rd as Hindi In government schools as kannada is 1st language in some they include English, kannada, Hindi and Sanskrit . The syllabus taught in the schools is that of CBSE, ICSE, NIOS, or the state syllabus. The curriculum includes subjects like science, social studies and mathematics apart from language- related subjects. Karnataka Government has launched a midday meal scheme in government and aided schools in which free lunch is provided to the Students. secondary education, the students pursuing the state syllabus have to pass an examination called the Secondary School Leaving Certificate (SSLC) to move on to the next level. The SSLC is administered by the Karnataka Secondary Education Examination Board. Students who have passed the SSLC have to
pursue a two-year pre-university course (PUC) or a three-year diploma course before they are granted admission to a degree (baccalaureate) college. In the pre-
university course, the student has to choose one among the three streams of Arts, Commerce, and Science. The Arts stream
includes subjects like History, Sociology and Political Science; the Commerce stream includes subjects like Accountancy,
Economics and Business Mathematics; and the Science stream includes subjects like Physics, Chemistry, Mathematics, Biology, Electronics and computer science and students can continue there students till PhD.
New education system in karnataka ,NEP will be replacing the 10+2 curriculum structure with a 5+3+3+4 structure. The
new system has proposed 12 years of school education with 3 years of pre- schooling/Anganwadi. 3-6 years of age is
globally recognized as the crucial age for the mental development of the child. Music Karnataka is the only Indian state where both Hindustani and Carnatic singers flourish. North Karnataka is predominantly famous for Hindustani music and South
Karnataka is well known for Carnatic music Dance Yakshagana a form of dance drama is one of the major theatrical forms in coastal Karnataka. A fusion of folk and classical tradition makes Yakshagana a unique form of art which includes colourful costumes, music, dance, singing, and most importantly dialogs composed on the fly. Dollu Kunitha ( drum dance)also the famous dance in Karnataka. Jaggahalige Kunita Karadi majalu Krishna Parijatha Lavani are famous dances in karnataka
Famous foods in karnataka ,cuisine includes the cuisines of the different regions and communities of Karnataka, namely, North Karnataka cuisine, South Karnataka cuisine, Udupi cuisine, Saraswat cuisine, Coorg cuisine, Mangalorean Catholic cuisine and Navayath cuisine. Famous foods in karnataka are Masala dosa,Raggi mudde,obbatu Neer dosa, bisibelabath etc ,
Agriculture in Karnataka Crops grown in Karnataka include rice, which is more or less the staple food, maize, pulses and oil seeds. Sugarcane, cashews, cardamom and chillies are also produced on a large scale in the state. Karnataka happens to be the largest producer of coarse cereals, coffee and silk in India.
Large Scale Industry Karnataka, has robust textile, agro, aerospace, heavy engineering and automobile industries too. Around 60% of biotechnology companies have a branch in Karnataka and it generates 50% of the total revenue earned by the Indian
biotechnology industry. Read more about industries in Karnataka . IT sector

Karnataka is a leading state in terms of industrial growth in India. It is the hub of the IT industry in the country. The
technology cluster in Karnataka ranks as the fourth largest in the world. The state has 47 IT and ITeS SEZs, several regions dedicated to IT investment, and three software technology parks. Small scale Industry Karnataka State Small Industries
Development Corporation is the industrial and investment promotion agency of the Government of Karnataka.
Banking The state of Karnataka, in the districts Kannada and Udupi known as South Canara, is called the cradle of banking in
India. This is because seven of the country’s

leading banks, Canara Bank, Syndicate Bank, Corporation Bank, Vijaya Bank, Karnataka Bank, Vysya Bank and the State Bank of Mysore originated from this state. The first five in the above list of banks were established in the districts of Udupi and
Dakshina Kannada. These districts have one among the best distribution of banks in India – a branch for every 500 persons.
Between 1880 and 1935, 22 banks were established in coastal Karnataka, nine of them in the city of Mangalore.
Police department There are 906 police stations, 230 circle offices, 91 SDPOs and 31 DPOs (including railway police) in Karnataka state. Police stations are headed by Inspector in towns and cities. There may be two to four Sub- Inspectors (S.I.) ,assistant sub-inspectors (A.S.I), Head Constables (H.C.) and police constables (P.C.).

Rural police stations are headed by a sub- inspector or two sub-inspectors covering law and order and crime, Sub-divisions are headed by Deputy Superintendents of Police and circles by Police Inspectors. superintendent of police’s (ASP’s) are also
there in some districts. Among the network of roads in Karnataka, 3973 km. of roads are National Highways.
Karnataka also has state highways of length 9829 km.
MEDIA The era of Kannada newspapers in Karnataka started in 1843 when Hermann Mögling, a missionary from Basel Mission,

Published the first Kannada newspaper, Mangalooru Samachara, from Mangalore. Transport system in Karnataka
The public bus transport in Karnataka is managed by the Karnataka State Road Transport Corporation. It was set up in 1961
with the objective of providing adequate, efficient, economic and properly coordinated road transport services.
Water transport Karnataka has 1 major port; the New Mangaluru Port and 10 minor ports;
Karwar, Belekeri, Tadri, Honnavara, Bhatkal, Kundapur, Hangarkatta, Malpe, Padubidri and Old Mangaluru. The construction of the New Mangaluru Port was started in 1962 and completed in 1974. It was incorporated as the 9th major port in India on 4 May 1974.
Air transport Mangalore and Bengaluru are the only two cities in the state that have International flights operating from their airports. Kempegowda International Airport is host to 9 domestic airlines and 19 international airlines and Lufthansa, British Airways, Air France, Singapore Airlines and Malaysiam Airlines, connecting the city to almost 50 destinations across India and the world. Road transport The road transport is also well developed in the state with many National and State
highways providing means for fast transportation. The headquarters of the South-Western Railway division of Indian Railways is located at Hubballi , Buses ,cars and trains are the means of transport for moving across distant places in Karnataka.
For transportation within the city or town limits; motorbikes, cars, auto rickshaws and buses are used.
Politics
The politics of Karnataka is represented by three major political parties, the Indian
National Congress, the Janata Dal (Secular) and the Bharatiya Janata Party. Karnataka State has been divided into four
revenue divisions, 49 sub-divisions, 31 districts, 237 taluks and 747 hoblies/revenue circles and 6022 gram panchayats for administrative purposes. The state has 281 towns and 7 municipal corporations.

The governor who is appointed for five years appoints the chief minister and on the advice of the chief minister appoints his
council of ministers all are elected. Capital City of Karnataka Bangalore is located in Karnataka. It is situated at a higher altitude of 920 meters on the Deccan Plateau. The area covered by it is around 741 sq.km Bangalore is considered to be a clean and elegant city despite its increasing population and industrialization. BANGALORE Has got Nike name ‘garment capital of India’.Silicon Valley of India Science City of India Garden City of India Capital of Karnataka.
Kannada film industry Kannada cinema, also known as Sandalwood, Kannada Film Industry or Chandanavana,is the segment of Indian cinema dedicated to the production of motion pictures in the Kannada language widely spoken in the state of Karnataka The 1934 film Sati Sulochana directed by Y. V. Rao was the first talkie film in the Kannada language It was also the first film starring Subbaiah Naidu and Tripuramba, and was the first motion picture screened in the erstwhile Mysore Kingdom.The film was produced by Chamanlal Doongaji, who in 1932 founded South India Movietone in Bangalore.
Policies of Karnataka Government Free bus pass to all students Universal Health Coverage Free education for girls Pushing for smoke-free kitchens Expansion of Namma Metro Identity for unorganised workers Industrial growth in the state Helping Dry Land Women empowerment Suburban Rail for Bengaluru.
CONCLUSION
Karnataka is rich in flora and fauna , Agriculture, Industrial ,Best in education as well as Namma metro , people migrate here for surviving purpose Were there are different people in a single state the land of many great leaders and Personalities Born in this land there is great development in Karnataka and also wonderful state.