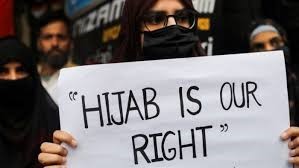 Hijab a religious right for Musilms girl and also it is their wish they will wear or not. Not only for them but every person has their own rights about what to wear or not.

But in Udupi, Karnataka for more than one and a half month the hijab controversy is going on. It started when some girls wearing hijab were not allowed to enter the school. They were asked to open the hijab and enter the school but they refused to open. Slowly in many places girls wearing hijab were not allowed to enter the schools or colleges. The authorities question is that it is not the dress code. After that some student parents filed a FIR against them and the muslims girl started protesting and it turned into a controversy when the other hindu student was wearing scarfs and chanting “Jai Shree Ram” and wanted to ban hijab.

The controversy went so far that it turned into a hindus Vs muslims riot. The muslims girl even complained that they were told to sit in different classes and they were not allowed to sit with other students wearing hijab. MLA Raghupathi told the reporters that “around 1500 to 2000 trainers have arrived from Kerala and Hyderabad to build the strategies to fight for hijab”. The controversy had reached to its peak that from different states muslim girls are protesting that hijab is their rights and nobody has the rights to ban it. Even it became an international conspiracy which is spreading like fire. Many leaders, even celebrities, are posting stories in Instagram regarding the hijab matter and also tweeting in twitter.

But MLA Raghupathi Bhat demanded an NIA probe for the hijab controversy. According to him the students have become puppets of the “Tukade gang” even with the activists misleading the students that should be stopped. The issue went to the high court and hearing will be on 14th February till all the students are told not to wear any religious dress to schools or colleges which can lead to more trouble. The Karnataka government has said that classes 11 and 12 together with degree colleges will start their classes once the controversy is over till 16th February they are having holidays but till 10th standard students can have their classes from Monday.

The court said that the student should focus on their studies rather than being involved in the controversy. Udupi Government PU college principal Rudragowda  S said “ that the students have crossed their limits, which call for disciplinary action. The colleges tolerated all nonsense for more than a month.

A major question arises that these many days nobody was having problems suddenly. Why are they having problems with the girls wearing hijab? Intentionally this controversy has turned into a hindus and muslims riot. Every religion gives the right to follow their own faith and nobody has the right to question them. It is a right decision taken by MLA Raghupathi for demanding NIA probe. The students were to respect each other’s religion. They are fighting and disrespecting it. Why should the hijab be banned? It is their right and no one should be forced not to follow their own faith. People are forgetting humanity for their own profit.