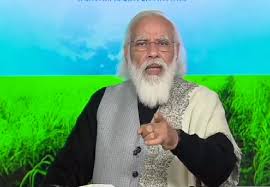 He said that the government is ready to have a word with protesting Farmers if and only issues, facts and logic are concerned.
“Farmers had some apprehensions about new laws, but people with political agenda came in between and introduced new unrelated demands,” the PM said.

The government has released Rs 18,000 crore to over 9 crore farmers under the the Pradhan Mantri Kisan Samman Nidhi(PM-Kisan) scheme.
Under the PM-Kisan scheme, a financial benefit of Rs 6,000 per year is provided to small and marginal farmers, payable in three equal instalments of Rs 2,000 each. The fund is transferred directly to the bank accounts of the beneficiaries.
“You would have seen that when the agitation started their demand was about MSP guarantee. They had genuine issues because they were farmers. But then those with political ideology took over,” Modi said.
“MSP, etcetera were pushed aside and now what is happening. They are demanding release from jail of those accused of violence… They want highways toll-free. Why have they shifted from farmer’s issues to new demands, farmers across the country have wholehearted welcome agriculture reforms I assure you that I will not let you down,” Modi added.
Prime Minister did not targetany particular group, he made several references that seemed aimed at Left-affiliated outfits and other opposition parties.
PM Modi said that the groups who are talking about mandis and the APMC are the ones who destroyed West Bengal and Kerala.
“There is no APMC and mandis in Kerala. Those ruling Kerala for years are joining Punjab farmers for selfies, but not doing anything for mandi system in their own state. They have time for misleading farmers of Punjab. If this is so good they why are they not fight to implement it in Kerala? They don’t have facts, levelling false allegations and spread misinformation and create fear among farmers and misleading them. Sometimes farmers get mislead by them,” PM Modi said.
Modi also lashed out at Mamata Banerjee-led government in West Bengal while alleging that they have destroyed the state and was doing politics by stopping over 70 lakh farmers of the state from getting benefits of the Centre’s flagship PM-KISAN scheme under which Rs 6,000 is being provided every year.
The Prime Minister wondered while there were agitations against the new farm bills, no protests were visible against West Bengal’s decision of not implementing PM-Kisan scheme.
Modi said more than 23 lakh West Bengal farmers have applied online to take advantage of this scheme, but the state government has stopped the verification process for so long.
“Why there was no protest for ensuring PM-Kisan money,” he said.
“If you listen to 15 years old speech of Mamta Ji, then you will know how much this ideology has ruined Bengal,” he said.
Modi said everyone knows how the state has been ruined by the political ideology of those who ruled there for decades.

Protesting farm unions on Friday alleged that Prime Minister Narendra Modi’s address appeared as an attempt to “divide and mislead” the farmers and said they want a legal guarantee on minimum support price.