The Post Covid India: Another definition for Humanity and Modern Civilisation. 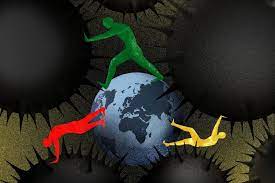 The year 2019 was all set to wrap the year harmoniously. The world was in the shoes to
welcome the new year 2020. The world never expected it would be a end and a beginning, it
would be the moment of despair and the hope, it would bring new words to and new
meanings to humanity and the news from Wuhan, China changed the modern civilization
upside down. After 1918 flu pandemic the world witnessed another virus outbreak. The
outbreak came from the market of Wuhan and they called Wuhan Pneumonia later it spread
rapidly among the region. Later the scientists identified the virus is from coronavirus family
that will transmits from human to human.
The WHO never take the virus seriously until January 30 2020, but it was too late. In the
second week of January the virus identified outside China, Japan in January 16 and randomly
spread in Asian countries. On the first phase the people infected had somehow connection
with the Wuhan. In January 20 India reported the first case in Kerala. A medical student from
Wuhan University. The country was all set to fight against the virus.
The Government never ignored the shocking news from the West the Indians heard
‘Quarantine’ for the first time. Later in the initial months of the new year the number of
people infected increased slowly, and the Government had a solace that the number of cases
that reported through the local transmission was low.
The whole world thought that the country never withstands in the Pandemic wave. Because
high population and they had doubts in the Indian Health Care System till march 25 the Prime
Minister Sri. Narendra Modi addressed the nation and announced complete lockdown for 65
days. India was the first nation who announced the complete lockdown when the cases are
low. In the words of Mukherjee, the lockdown didn’t helped much but it gave time to
strengthen the healthcare system. When compared to other developed nations India may
never have much Scientific measures but have the great potential. Like the ants from sanitary
workers to the IT professionals, from the Primary health workers to the Scientists stand
behind the Government.
In the initial days of February, the country did first evacuation from China. Air India flight
take off with 324 Indians from Wuhan. The older generation were ready to sacrifice
themselves for their younger generation, on the other hand the youngers volunteered
themselves to be the part of the huge responsibility. Being the second country using the
technology well, all the computers connected, the drivers took their steering the retired
officials came to help them with their experience, the artists took initiative encourage the
people and the restaurant opened to feed the hungers, the Police tied their boots for keep their
people safe from the unwelcomed guest.
The experience and intelligence made the Bharat Technology to develop the vaccine with the
help of Oxford of in the final months of 2020. The Covaxin and Covid shield. The
vaccination started from the frontline fighters ie health workers, police and civic officers and
then to the ordinary people starting from the older generation. Everyone waited for the turn
patiently inclining our Prime Minister he waited till his turn. In October 21, 2021 the country

crossed 100 crore covid shots, within 278 days, even though India was shaken in the second
wave, we set to fight against the third wave.
All the scientists in different institutions, the health workers and civic officers worked for
hours and brought a new definition for Indian Health Care System, when other countries
slowed their pace after the second wave, the country never blink the eyes not even a second
which made the country to lend the hands to the other countries like Brazil, Sri Lanka and
Nepal.
We can’t say that the India start their research and the development in the health care system.
The pandemic accelerated the process of research in the healthcare system. In the third wave
we reached in the phase to help each other. In next upcoming years the country will be the
axis for developing new technologies in the whole world, the virus showing different
countries as a developing nation we are still in the process of climbing ladders in every field
included technologies, start-ups and agriculture sectors and giving new dimensions to
modern civilisation.